Unpentbium (pron.: /uːnpɛntˈbiəm/), also known as eka-nobelium or element 152, is the temporary name of a hypothetical element in the periodic table that has the temporary symbol Upb and atomic number 152. As of 2016, no attempt has been made to synthesize unpentbium.It is therised that it is very radioactive and has a half life of >1ms.It is doubted that it will be made soon, successfully or not.

As of 2016, no attempt has been made to synthesize unpentbium.

Unpentbium is historically known as eka-nobelium. Unpentbium is a temporary IUPAC systematic element name derived from the digits 152, where "un-" represents Latin unum meaning "one"[3], "pent-" from Greek penta meaning "five"[4] and "bi-" from Latin bis meaning "two".[5] Research scientists usually refer to the element simply as element 152. Transuranium elements like this usually end up being named after a scientist or the location of a laboratory that does work in atomic physics.

Its position in the periodic table indicates that unpentbium may be chemically similar to ytterbium and nobelium. A predicted oxidation state is +3.[6][7]

The DC superhero Arm-Fall-Off Boy got his power of arm-falling-off through exposure to what was referred to as Element 152. At that time, Element 152 was seen as fictional since it was not yet theorized. http://dc.wikia.com/wiki/Arm-Fall-Off-Boy_(Pre-Zero_Hour)

Mon-El tried to make this element by combining Gold, Silver, and Iron. 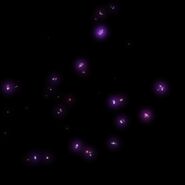 Artist's impression of nobelium
Add a photo to this gallery

Retrieved from "https://periodictableofelements.fandom.com/wiki/Unpentbium?oldid=8664"
Community content is available under CC-BY-SA unless otherwise noted.