Tennessine is the name of a element that goes under the permanent symbol, Ts and belonging to the atomic number 117. This element is placed under the halogens, so it may probably be a halogen. The first attempt to synthetically make the element happened at the Flerov Laboratory in Dubna, Russia. Tennessine's old name is Ununseptium

Tennessine is named after Tennessee, an American state.

According to the IUPAC, the name of the discovered element should end with an -ium, not an -ine, even if it is a halogen,(IUPAC had broke this decide)but on 8th June,2016,The IUPAC decided to change this element's name to Tennessine (Ts). That mean IUPAC "It had said something,but it do something(Decide Ununseptium's name is Tessessine) break the decide,so it hit its mouth".

The staff of the Flerov laboratory has begun to experiment with the reaction of below:

A team in Darmstadt (the people to discover Element 112) have already begun to synthesize tennessine. 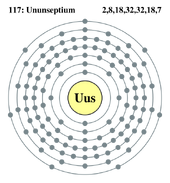 The bond lengths are predicted to differ from the lighter halogens (due to relativistic effects). The element may show sentimental characteristics also.

Retrieved from "https://periodictableofelements.fandom.com/wiki/Tennessine?oldid=10809"
Community content is available under CC-BY-SA unless otherwise noted.